Dominic Thiem will face Daniil Medvedev at the big final of the ATP 500 tennis tournament in the Catalan capital Barcelona.

The №3 seeded Dominic Thiem caused the big upset of the tournament, eliminating from the competition the most successful player on clay courts in history Rafael Nadal. The Spanish legend didn’t win a single set against the Austrian, losing the match in two – 4-6 4-6.

It’s an interesting fact that for Rafa Nadal this was a first loss at the 1/2-finals in Barcelona after 11 consecutive wins in this phase of the tournament. Two years ago Nadal faced Thiem in the final of the tournament and won, but now the Austrian player avenged his loss.

, who beat Kei Nishikori in three sets – 6-4 3-6 7-5. The Japanese was aiming to reach the final in Barcelona for a 4th time in his career, but this time Medvedev did not allow him to do that. The Japanese is a two time champion in the tournament from 2014 and 2015, but this time he’s going to miss out on participating in the final.

In this way Daniil Medvedev avenged his loss against Nishikori at the final in Brisbane in the beginning of the year. The balance between them is now even – 2-2.

So far Dominic Thiem and Daniil Medvedev have faced each other just one time in their careers. Their only match so far happened in St. Petersburg in 2018, when during the 1/4-finals Dominic Thiem achieved a difficult win in three sets – 6-2 3-6 7-6(2).

We shall expect a pretty good final between Dominic Thiem 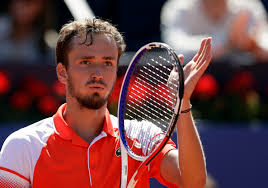 and Daniil Medvedev in Barcelona on Sunday. These two players proved their worth so far in the tournament.