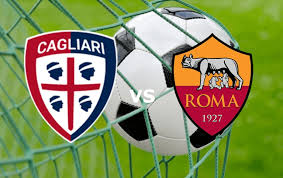 Cagliari welcomes Roma in a game from the 15th round of the Italian Serie A. Let’s take a look.

Cagliari are 13th in the Serie A standings with 16 points won so far and a record of 3 wins, 7 draws and 4 defeats. In their last five games the Rossoblu won just once – against Chievo, also doing three draws and suffering one defeat against Juventus.

Right now Cagliari are in a run of three consecutive losses in the league. In their last game Rolando Maran’s boys made a 1-1 draw during the visit to Frosinone. Francesco Cassata opened the score for the home team, but Diego Farias equalized for the Rossoblu.

Before this, Cagliari made two other draws against Torino and SPAL. As we know, Cagliari’s main goal in the Serie A is survival, so being 5 points ahead of the 18th Bologna is pretty good place to be for them.

Roma on the other hand are having some difficulties since the start of the season. Right now the Wolves are 7th in the Serie A with 20 points and a record of 5 wins, 5 draws and 4 defeats. Eusebio Di Francesco’s team is currently 5 points behind the 4th Milan, so they have some work to do in order to reduce this gap.

In their last five matches Roma won just once – against Sampdoria, doing three draws and suffering one defeat. In their last game the Wolves made an exciting 2-2 draw with Inter at the Olimpico. Cengiz Under and Aleksandar Kolarov scored for Roma, securing the point for their team.

These are our thoughts about the Serie A game between Cagliari and Roma from the 15th round of the league. Roma are the favourites here, but lately the Wolves are having some trouble to win. Be careful.