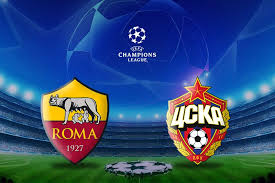 CSKA Moscow hosts Roma in a match from Group G of the Champions League. Let’s take a look at this clash, which will be played on Wednesday night in the capital of Russia.

Just two points separate these two sides at the moment, which makes this game incredibly important. Roma are currently 2nd in the group with 6 points, while CSKA Moscow are 3rd with 4 points. For the Russian team this is a terrific opportunity to increase its chances for a Top 2 finish in the group and a qualification for the 1/8-finals. They will have the support of the stands, so this is their moment for sure.

These two teams met just two weeks ago on Italian soil, where Roma celebrated a comfortable 3-0 win. Edin Dzeko scored a brace for the Wolves, while the Turkish talent Cengiz Under added one more goal for Eusebio Di Francesco’s team. For Roma it was a second consecutive win in the group, while CSKA suffered their first defeat since the beginning of the campaign.

We can say that Roma are a slight favourite here, of course, but it’s very difficult to play against Russian teams on their home soil. Just ask about this the current holder of the trophy in the Champions League Real Madrid, who recently lost their visit to Moscow. If Roma are not concentrated on one hundred percent, this could turn out to be a very difficult trip for them.

Last season Roma reached the 1/2-finals of the Champions League, eliminating Barcelona from the competition. Now the Wolves will want to do something similar. They have a very solid team, but it won’t be easy for them in the Russian capital.

These are our thoughts about the Champions League clash between CSKA Moscow and Roma. Good luck!