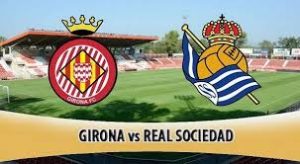 Girona hosts Real Sociedad in the last game from the 25th round of the Spanish La Liga. Let’s take a look at this clash in Catalonia.

Girona made an amazing impression last week, beating Real Madrid at the Santiago Bernabeu. Before this, the Catalans were in a long run of consecutive defeats. Because of this, everyone thought that Real Madrid won’t have any problems to beat them. But nothing like this happened.

Casemiro gave Real Madrid an advantage at the Bernabeu, but in the second half everything went wrong for Santi Solari’s team. Christian Stuani equalised for Girona from a penalty kick, while Portu scored the winner for the Catalans. It was an unexpected result, but very positive for the visitors.

After this win, now Girona are 15th in the league standings with 27 points. They have 6 wins, 9 draws and 9 losses since the start of the campaign.

Real Sociedad on the other hand are 7th in La Liga with 34 points won so far. Right now the Basques are in a good shape, being unbeaten in their last five games. In these matches La Real won twice and made three draws.

Real Sociedad’s last game was successful for the Basques. They hosted Leganes in San Sebastian and enjoyed a 3-0 win. Mikel Oyarzabal scored a brace for La Real, while Willian Jose also scored once for the home team.

Right now Real Sociedad are just 2 points behind the 6th Deportivo Alaves. The Basques have a very good chance to chase a place in the European competitions for next season. If they continue to show consistency, they might do it.

This was our examination of the La Liga clash between Girona and Real Sociedad on Monday night. Both teams won their last games in the previous round. It shall be very interesting.